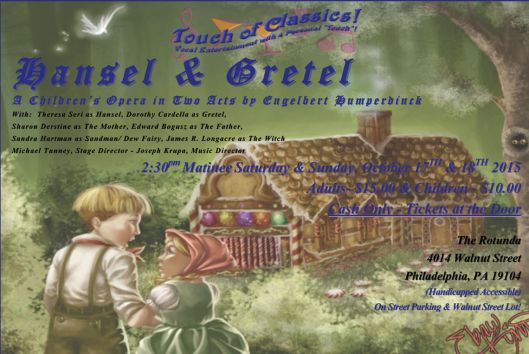 Touch of Classics!’s James R. Longacre and Dorothy Cardella bring this fully staged and costumed opera for the enjoyment of young and old during the Halloween season.Everyone knows the story of the two children’s adventure after their Mother sends them into the dark and eerie woods in search of strawberries. Hansel and Gretel get lost in the deepest part of the wood until they discover the magical gingerbread house of the evil Witch, who quickly captures them and prepares to make them the latest batch of gingerbread children to add to her collection. Gretel outsmarts the Witch and pushes her into the oven, freeing the other children from her magical spell and ending her reign of terror.Featuring: Teri Seri as Hansel, Dorothy Cardella as Gretel, Sharon Derstine as The Mother, Edward Bogusz as The Father, Sandra Hartman as The Dew Fairy & The Sandman, James R. Longacre as The Witch.Directing the opera is Michael Tunney. Music Director is Joseph Krupa. Choreography by Dorothy